Charges come after a Sunbury resident called authorities to report missing items just before 6 a.m. on the morning of December 11, 2018.

“The homeowner heard the garage door open, and upon inspection, found that tennis rackets and Frisbee golf discs were missing from the vehicle in the driveway,” said Acting Prosecutor Chris Betts. “Around that same time, a similar complaint came in from another resident on the same street.”

The resident at the secondary location reported two chainsaws missing from his barn. He also stated his truck had been gone through, and someone had tried to unhook its trailer.

“While the first two calls were being investigated, yet another homeowner called to report an unknown male on their property who was attempting to steal items in the driveway area,” Betts said. “The homeowner fired two shots at the suspect vehicle, a gray minivan, which then backed out of the driveway and became stuck in a ditch.”

The suspect fled on foot and was detained later in the day when a resident called to report a suspicious person matching his description.

“Authorities searched the minivan, which was determined to be stolen, and found the items that were reported missing,” Betts said. “They also found a leaf blower and plastic totes from a fourth location.”

An arraignment date is not yet set. 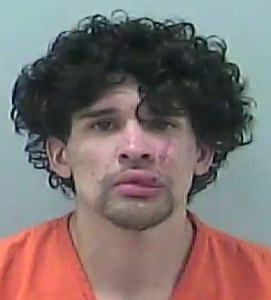