Charges come after law enforcement responded to a reckless driver in the area of Skinner and Bowtown Roads in Brown Township on March 27, 2019.

“Authorities observed a dark blue pick up truck driving from farm fields to roadways and back,” said Acting Prosecutor Christopher Betts. “The driver ignored signals to stop for at least 45 minutes before being boxed in by law enforcement vehicles and forcibly stopped.”

The driver, Joseph Fisher, was taken to Grady with minor injuries and then transported to the Delaware County Jail.

Fisher is charged with failure to comply with order or signal of police officer – a third-degree felony, vandalism – a fourth-degree felony, obstructing official business – a fifth-degree felony, and failing to stop after accident on public roads or highways – a first-degree misdemeanor.

An arraignment date is not yet set. 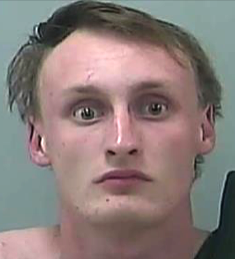