Charges for the trio come after they were pulled over on April 5, 2018 as part of an ongoing investigation.

“The men were traveling south from Toledo in two separate vehicles when they were pulled over in Delaware County,” said Delaware County Prosecutor Carol O’Brien. “ A search of the vehicles resulted in the seizure of a massive amount of drugs, 4.4 pounds of cocaine all coming to the central Ohio area.” 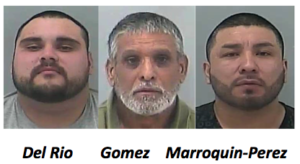